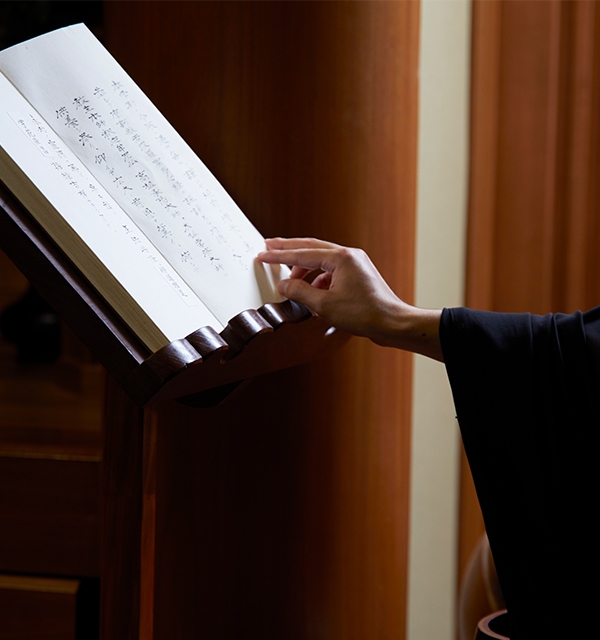 The spirit of foundation, that have been with Komazawa University, is Buddhism doctrine and Zen mind of Japanese Soto Zen school as stated in our Founding Principles. With a history spanning over 420 years, Komazawa University and the Faculty of Buddhism have pursued intensive research into Buddhism and Zen with a record of academic achievement. As for Zen in particular, we have maintained close ties to Eiheiji and Sojiji, the two head temples of the Soto Zen school, and have devoted themselves with considerable effort not only to research concerning Two Founders Dogen and Keizan but also to research exploring the origins. Moreover, we constantly practice Zazen with the research.

Today, even as we reap the many benefits of the pursuit of division of labor and revolutionary advances in science and technology, we have come to live in a world in which we are divided and must exist within superficial relationships. This is why we are said to have become poor in the spiritual world despite the increasing sophistication of the material world. Amid the interweaving of excitement and discouragement, hope and disappointment, many people surely ask themselves "What is a human?" and "Who am I," while as they continue to face severe loneliness.

In such times, Zen draws attention the world over. Recognized as a mystery of the Orient and a beautiful part of the culture of Japan, Zen has attracted the interest of not only religious practitioners but also of businesspersons, educators, physicians, athletes, and others. It is carried out under a variety of styles, arrangements, and transformations, with countless benefits claimed. Many academic disciplines, including psychology, medicine, business administration, and anthropology have carried out analyses of its efficacy. More recently, as examples of specific efficacy are often cited in the biographies and other works of famous individuals, Zen has found favorable acceptance in the world.

Amid these circumstances, Komazawa University, with its origin dated back to 1592 and tradition of orthodoxy, thinks what we should do now. By going beyond silent absorption in research and practice to carry out both essential research and interdisciplinary research into Zen, the university takes another look at Zen and deeply recognizes the expectations and responsibilities that it must communicate. We would like Komazawa University to take this opportunity to actively undertake wide-ranging activities as an international center for Zen research. Fortunately, Komazawa University is also a center for the intellect, where many outstanding scholars in the sciences and the humanities come together and where interdisciplinary and international activities can be achieved.

We hereby proclaim that all of Komazawa University, acting as one, will make "Zen" the brand of the university and "ZEN, KOMAZAWA, 1592" its message to the world.