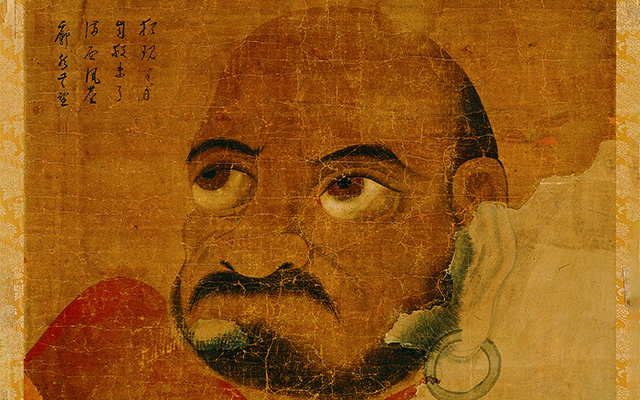 The History of Zen: Discovering the Roots of Sōtō Zen (13)

The Zen of Bodhidharma up to the time of the Third Patriarch Sengcan was nearly identical to Indian Zen, but through the Fourth and Fifth Patriarchs up to the time of the Sixth Patriarch Huineng (Jpn. Enō慧能, 638–713) the unique features of a Chinese Zen distinct from Indian Zen emerged. Accordingly, the Sixth Patriarch Huineng is named as a seminal figure in Chinese Zen. With the Sixth Patriarch Huineng, Indian Zen shifted greatly toward a Chinese Zen. For that reason, the Sixth Patriarch Huineng is second in importance in Chinese Zen only to Bodhidharma.
According to his biography, before Huineng became a monk he was a merchant who sold firewood to support his mother. While selling his firewood he heard a customer reading the Diamond Sūtra『金剛経』, and attained awakening. He immediately climbed Huang-mei-shan黄梅山 and became a disciple of the Fifth Patriarch Hongren. However, even though he had entered into discipleship under Hongren, for eight months he was made to pound rice, and did not receive any teaching directly from the Fifth Patriarch. As it happened, the time came to decide who would follow the Fifth Patriarch as the Sixth Patriarch. The Fifth Patriarch ordered each of his 700 disciples to explain their spiritual state in verse form偈. At that time, the foremost disciple Shenxiu (Jpn. Jinshū, 606?–706) wrote:
The body is the bodhi tree. 身是菩提樹
The mind is like the stand of a bright mirror.心如明鏡台
Constantly make efforts to polish them:時時勤払拭
Do not let any dust accumulate.*1勿使惹塵埃
The 700 disciples were all moved by this verse, and none dared to write their own verse against it. However, when Huineng heard this he said the verse was lacking and wrote the following verse to correct it.
Bodhi originally has no tree.菩提本無樹
The bright mirror too has no stand. 明鏡亦非台
Fundamentally there is not a single thing,本来無一物
Where could any dust accumulate?*2何処惹塵埃
When Hongren saw this verse, he knew it was appropriate for whoever was to become the Sixth Patriarch, and had Huineng succeed him as the Sixth Patriarch. After becoming the Sixth Patriarch, Huineng went south to spread Zen there, and Shenxiu stayed in the north to teach Zen. For that reason from this point onwards, the Zen school was divided into the Southern and Northern Schools, with Huineng representing the Southern Zen School南宗禅, and Shenxiu the Northern Zen School.

*1 The meaning of this verse is, “The body is marvelous like the bodhi tree, and the mind is pure like the stand of a bright mirror. Always make efforts to polish the body and mind, so that no dust will attach to them.”
*2 The meaning of this verse is, “Originally bodhi is not a tree, and the bright mirror also has no stand. Fundamentally, nothing is inherently existing, so where could any dust attach to?”